Right from the source: Beginnings

Did Joseph of Jacob have just a feminine look like his mother, or does the bible imply he could have been a eunuch or even gay? King David had sex with Bathsheba, the wife of one of his best warriors, assuring afterwards Uriah the Hittite got killed in battle. Abraham served his guests meat with milk and honey, a meal that would certainly not be considered kosher today. Source of these reflections: the Bible.

The bible tells us many valuable stories, yet the majority of them have been buried under a pile of (religious) interpretations given much later. In reading the bible, we fail to go back to the roots of them all: the original text in Hebrew.

Meir Shalev goes back to the biblical basics and tells us of all the first events. He carefully takes you on a rollercoaster ride through the Ancient Scriptures and goes back to the original meaning of every story, paragraph and word. An interpretation free of religious readings, Beginnings offers a refreshing look at all mystified biblical figures.

God promises fertility, but nowhere is there any guarantee for finding love in life. Even paradise was not without danger. Eve was seduced by a snake in eating an apple, maybe because the snake wanted to take the place of man (in this case the place of woman) in paradise. Not to mention the story of Lot and his two daughters, let alone the suffering of Sara and Rachel to get their first son. 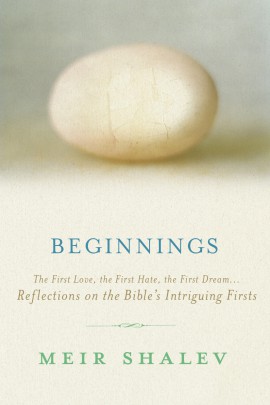 And what about God? Is he the only god in the universe, or the only god we are allowed to obey or pray to? His relation with mankind is even more controversial. God’s conversations with his subjects were at times neither straightforward nor consistent. Other gods might have accompanied God when he visited Abraham for a casual chat around the fire. And what did we make of our own, sole god? First things first, right?

Meir Shalev is able to bring the bible as it should be brought and thought: objectively, from the source and in a no-nonsense style. He’s accurate and never searches for an excuse in explaining the story as he sees it. You might not agree with every statement or interpretation, yet Beginnings can be the start of a vivid discussion on what we take for granted as being written in the Bible.

The book is available in English (Beginnings: Reflections on the Bible’s Intriguing Firsts), Dutch (In den Beginne: eerste keren in de Bijbel) and Ivrit.