To honor its 35 years of existence, the Jaycees of Knokke-Heist organized a splendid party in the world-renowned Casino of Knokke Saturday May 21, 2011.

The evening started with a gala-style outdoor reception, followed by a Walking Dinner inside the casino where new members as well as founding members exchanged experiences and anecdotes accompanied by a live Jazz-band. From 11pm the party got really on its way with a Burlesque performance by dancers of Rose De Leyn. King Jazz gave a live concert and DJ Nicolas Decoster guided the dancing crowd with a splendid mix into the night.

I had the honor to design Posters, Flyers, Entry Tickets and Party Booklet alike. Truly an honor, considering JCI has been the driving force behind many local (social) initiatives during the past decades. 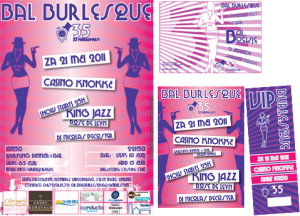 A journey into Sephardi Jewry

The story of Sephardi History is one of long lost hope and acute despair. Or at least, it was. Only about 300.000 still speak Ladino, or Spanish (in Hebrew or latin script) as it was spoken around the 1492 expulsion of the Jews in Spain. Their culture is celebrated, but not really lived anymore. It is an interesting but sad story, beautifully written and documented by Esther Benbassa and Aron Rodrigue in their book “Sephardi Jewry”. Academic and objectively written, it tells you history from a different perspective: the Sephardi experience from the 15th century till World War II.

Once concentrated on the Iberian Peninsula, they left southern Europe bringing with them a unique culture fomented by a longing for a long lost homeland. Known as a force of progressive innovation and clever (ideological) thinking, the history of most Sephardic centers in the world – located in the Ottoman empire – shows a remarkable dynamic and a search for progress. Being traders, they knew the world but being considered by the Ottomans as a community as a whole, integration of the community with their neighbors was limited. Innovating at first, their vision was mostly inwards oriented and the changing ideological winds from which they were protected by a declining Ottoman empire, did not allow the community to prepare for integration with (and into) the new nation state.

Trade with the West shifted and the economic importance of the Levant diminished, making the Sephardi community rely on old structures and diminishing returns. Poverty was omnipresent, education limited and most communities were holding on to a by then antiquated rabbinic culture. The Ottoman Empire eventually fell on its knees and a new wave of nationalism pushed Sephardic Jews in Turkey and the Balkan into disarray.

The authors of the book go to great lengths to draw an inclusive overview of the importance, rise and the eventual demise of the Sephardi. Although particular in its kind, the book is at times a tad confusing, offering the reader a myriad of data, while loosing timeline, location and interaction.

Remarkable has been their study into the influence of the French Jewish Community through the Alliance Israélite Universelle. Gallicizing great part of the Sephardic elite during the 19th and the beginning of the 20th century, it opened Sephardi Jewry to a new school of thought, ideology and community organization. Schools were mainly in French, and while this certainly contributed to a broader world vision, it resembled more the politics of a French imperialistic movement than the construction of a local community integrated with its surrounding. It goes without saying that this surprised me, as I was convinced Hebrew would have been considered to be the integrating language of the Jewish community.

With the exception of a limited number of communities, the book ends with the demise of the Sephardi culture and its people. It left me with a feeling of having read history in a different way, both refreshing and realistic. I would never have discovered this part of history, hadn’t I bought this book on quiet Saturday afternoon.